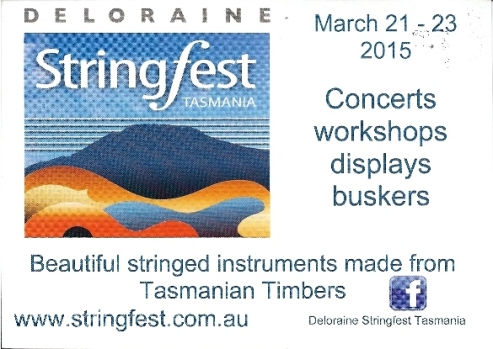 The Deloraine Stringfest is over for another year. Being a stallholder at Stringfest gives you a restricted view of the festival since so much happens at other venues around the town and in the main street.

The Community Hall where the luthiers, tonewood merchants and others such as myself hang out can seem a lonely place at times. That was my impression on Saturday, the main day of the Festival, with far fewer people than last year. A common comment was that there are too many other events on that weekend. The crowds picked up Sunday morning and I met a few interesting people, picked up some useful information and perhaps even some new blackwood growers.

I love the busking and the random spontaneous music making. I think that is also a special feature of Stringfest. It’s almost a BYO instrument event!

Clearly it will take Stringfest some years to get established and create a unique identity and following. It will take a big commitment and effort by the Deloraine community to make it a success. But it will be worth the effort!

Stringfest is a unique vision.

The focus on the musical performers is great, but Stringfest will never compete with the other established music festivals. The key to success for Stringfest I believe will be attracting a broader audience with the performers as well as the luthiers, tonewood merchants and tonewood growers.

But keeping tonewood merchants at Stringfest will be difficult. Whilst not many of us can afford a custom made guitar, at least the luthiers have merchandise that will sell, and it certainly attracts plenty of interest. Tonewood merchants however occupy a very restricted market, so Stringfest offers them little in the way of financial reward, unless we get to the point where bigger guitar companies start coming to Stringfest. While that’s not beyond the realms of possibility it is still a few years away.

So we need new ideas on how to make the non-performing side of Stringfest more useful and engaging for both the participants and the audience.

I think the luthiers, merchants and growers themselves need to take ownership of their participation at Stringfest and be more creative.

How can we better link the performing and non-performing sides of Stringfest? Artists/luthiers on stage road testing a range of local guitars of different designs, sizes, shapes and tonewoods?

Finally my thanks and appreciation to the organisers and volunteers, and the Deloraine community, who make Stringfest happen. I think it is a fantastic idea and a great model.

I will be back again in 2016 to give the Festival my fullest support.

This entry was posted in Events, Stringfest, Tonewood. Bookmark the permalink.

One response to “Stringfest 2015 Review”