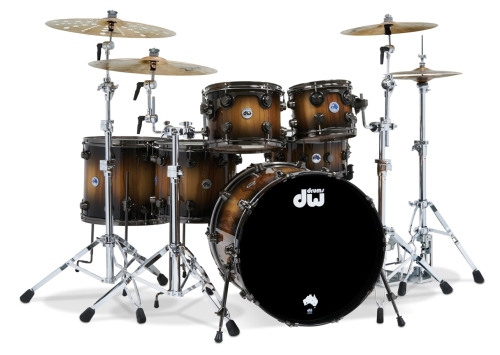 Here is an update on the previous story.

Thanks to Scott Seymour for this story.

I remember back in 1985 when I got my first drum kit, it was an entry level set, but they were mine, and it was an exciting time. Some of the drums needed minor repairs, loose screws, rattles here and there, so I took each and every drum apart and became familiar with their construction and managed to fix some of the problems myself. I remember my first brand new professional drum kit as well, the day the delivery truck arrived and the boxes began being unloaded. One thing that stood out though was that the individual drums arrived without drum heads on them; they were in a separate box, and every time I opened a box with a drum in it, wow…..the smell of wood. I’ll always remember that, it was wonderful.

I’ve been watching guitar companies like Maton, Taylor and others using Tasmanian Blackwood and Sassafras for quite a few years, and as a tonewood they work exceptionally well. I play guitar as well as drums, so I have an interest regarding both instruments. It’s no secret that small boutique drum manufacturers in Australia have been using these timbers to make drums as well, and these drums have gained a reputation for being really good, not just visually but more importantly in terms of their tone. It’s very difficult though to get the world to sit up and really take notice, in a big way, of drums made from Tasmanian tonewoods, and realise just how good they are, unless the company behind them has a worldwide audience.

DW has firmly established themselves in the drum market and are a well-known name in the music industry, they recently celebrated their 45th anniversary and so many of the world’s best drummers play their kits and/or use their hardware, cymbal stands, foot pedals etc. They have an artist roster well over a dozen pages long everyone from Mick Fleetwood (Fleetwood Mac) Peter Criss (Kiss) Tommy Lee (Motley Crue) Dave Grohl (Nirvana/Foo Fighters) and Roger Taylor (Queen) to name a few, play or have played DW Drums.

The sort of exposure a company like this can generate is on a whole different level to the smaller manufacturers. DW also own Gretsch Drums, LP Percussion, Gibraltar Hardware, PDP (Pacific Drums) and Ovation Guitars (yes….a world renowned guitar brand).

Sure, I could try and bluff my way, get a company interested and then frantically get on the phone to call mills and timber suppliers to try and get what is needed, and hope for the best, but that’s not a sound idea, it’s a risky notion at best. I needed to find someone who knows timber, knows the industry, has access to not just ‘ok’ timber, but above average quality timber, something really special. I needed someone who not only sources the timber, but someone who is all over every aspect of it, the logging, the transport, the milling, packing and sending, otherwise end costs can get out of hand if the process involves paying six different people for all of the required processes. My only other requirement was that the timber is legally sourced and only from private land because I am not a fan of seeing native forests destroyed, I don’t want to support that. It took a few years but I ended up finding just the right person, Jason Weller, in Burnie.

I’d like to say it was through great planning but honestly our meeting was a total fluke and happened via social media back in June last year when I spotted a photo Jason’s brother Paul had posted of a spectacular Blackheart Sassafras log that they had just cut. I’ve seen Blackheart Sassafras before but this, this was stunning. I left a comment saying something along the lines of ‘this would make some sensational guitars’…..funny how my first thought was still the guitar industry. Well through Paul I ended up talking with Jason, and this is where the story gets really interesting. We discovered quickly that while I had some basic knowledge of tonewood, Jason had very little knowledge of the music industry but a wealth of knowledge regarding timber, and was all over every aspect of supplying product. Bingo, the perfect match.

Initially I was going to market the timber to guitar tonewood suppliers, and although we started to do that, we quickly discovered that it wasn’t going to work out too well, and that indeed, it can be a ‘cut throat’ industry, because some people go out of their way to make it so.

So that idea quickly went out the window, and it was then that I thought…….drums. Here is the chance to ‘go for it’, why didn’t of think of this first? Jason was supportive of the idea and said, ‘well…let’s see what happens, can’t hurt to try’. How right he was.

So in June last year I contacted DW and was put in touch with the Vice President of the company, John Good. John has been with DW since the company first opened their doors.

What I sent John were a couple of photos of Jason’s Blackheart Sassafras and Blackwood, a brief introduction to the species, and the idea for drum shell construction with an explanation of why I thought it should work, and how it might sound. Now, of course, a theory is one thing, but this was a sound theory (no pun intended) based on a few years of research.

John really liked the idea and we ended up emailing and talking on the phone several times working out the details, and of course, Jason and I always kept each other up to date.

Talking with John was great, he understands drums and drum shell construction, I understand drums and to some extent their construction as well, we were on exactly the same wave length.

Initially the idea was that we would send just some sample veneers over to DW, they had never worked with these species before, and wanted to make a few drum shells and see if this might be a viable project. The more John and I talked the more information that changed hands and our confidence in the idea grew. I got a phone call from John early one morning (6am here in Tassie) and he said ‘Scott…..we want to get a project underway, 200 drum kits, I’m going to come and see you and Jason, this is all very exciting, I can’t wait’.

Sure enough, in September, John, his wife Esther, and long-time friend from Melbourne, Bill Mackin, arrived in Burnie for a few days and we all sat down to really iron out the details of the project, to look at veneer, logs, and spend some time together. It was an exciting time.

The drum shells themselves are 9 ply…..the outer ply is Blackheart Sassafras, the inner most ply is Crown Cut Blackwood, the core of the shell, the remaining 7 ply, is all Quarter Cut Blackwood, but just plain grain Blackwood, free from knots/inclusions etc. because we’re after tone from this Blackwood, not appearance because it cannot be seen, we don’t need to be using the more rare fiddleback or spalted varieties. John states in the video that Blackwood can’t be rotary cut, well, it can be, but as we explained to him, to achieve the best tonality from the wood, it really needs to be Quarter Cut. We need to remember though that getting the best out of Blackwood is something people in Australia have been working out for a long time, but for John, he’d never even seen Tasmanian Blackwood.

So there we have it, the world is now being introduced to ‘Pure Tasmanian Timber’ drum kits, and this also proves that while it’s great to see guitars being made by large well know companies such as Maton and Taylor, and gaining international recognition, let’s not forget drums, they are an acoustic instrument after all.………..

If these DW Tasmanian blackwood drums are a success how do we ensure that it results in more blackwoods being planted to grow more quality timber? It will require a lot of direct intervention to get the interest and confidence of Tasmanian landowners.

It looks to me like these 200 Pure Tasmanian Timber drum sets will be sold out the day they go on sale.