It’s a great read and a terrific promotion of Tasmania and our timbers. 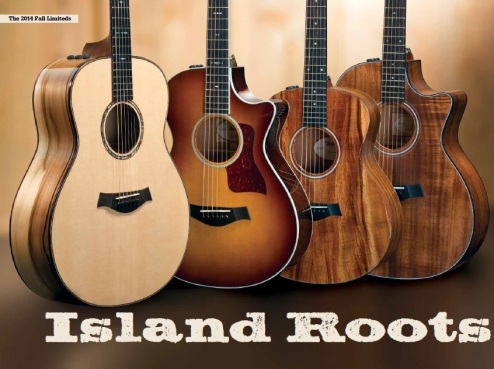 Tasmanian blackwood is a material I first encountered at a local exotic wood dealer. It was love at first sight. The first board I picked up said with a nearly audible voice, “I want to be a guitar.” I could see its beautiful color variegation, as warm as cinnamon, its straight, even grain, and feel it’s perfect density. It came back to the shop without ever leaving my hands and turned into as wonderful a guitar as it first suggested. Blackwood and I have enjoyed a great relationship ever since. Over time, I became interested in learning where this wood came from and meeting its family. I wanted to know the condition of the forest where it grew. I soon discovered that blackwood had forest friends that also wanted to be made into guitars. My interest led me to meet Bob Mac Millan, another woodworker who had been charmed by Tasmanian woods. I learned more about his timber operation and how the wood was being harvested. In our first conversation, Bob said something like, “Ah, so you’ve fallen for the blackwood, too…. You should come down and have a walk out in the bush and take a look. I’m only on the other side of the world; it’s not far.” Spoken with typical Aussie understatement.

Well, I’ve had a look. And I like what I see as a guitar maker and a timber fanatic. I see fantastic instrument wood being collected in a selective and low-impact way, and with a mind toward a healthy future forest. Although blackwood is a relatively unknown guitar wood in comparison to the familiar faces of India’s rosewood, or central America’s mahogany, or even Hawaii’s koa, which is a cousin, this may have more to do with Tasmania’s distance from large guitar makers. The familiar woods have a long history of importation for furniture making and have been available to guitar manufacturers for decades, so naturally they were used. Although blackwood hasn’t been a regular attendee at the guitar party, it surely isn’t for lack of good sound. This wood sounds better to me now than years ago when I first worked with it. In fact, I haven’t heard a blackwood guitar yet that I didn’t like. Sure, I’m biased because I like guitars, but I’m still a fan. It’s immensely rewarding to get to know the personality of a material like blackwood, or a newcomer like sassafras. As a builder, I notice the ways the wood’s physical properties contribute to the musical values of volume, tonal color, sustain and balance of a finished instrument. There are common traits among woods to be sure, yet there are unique subtleties inherent to a particular timber. I often find myself lacking words precise enough to describe those traits, so I end up comparing them to other woods to provide a relatable reference. Yet this seems insufficient. It might also seem to imply that the wood is an inferior substitute, which is far from true. There is uniqueness that radiates musicality in many woods, both well and less known, which makes each board a unique treat that deserves to be valued and savored.

This season, we’re thrilled to be making instruments with blackwood and sassafras from Tasmania, as well as blackwood’s Hawaiian cousin, koa. We’ve been savoring the process of preparing and building these guitars with these precious woods. These instruments are a real treat for both the woodworker and the musician who can appreciate the aural and visual beauty of the wood. This treat seems to resonate even more sweetly when I know the forest is healthy and trees are harvested in a way that closely agrees with all that we as wood lovers value.

Clearly Andy Powers is a big fan of Tasmanian blackwood. Many Tasmanians will know exactly how he feels. I don’t agree with everything that’s written here but never mind. Progress is being made and we will get there eventually.

One day Tasmanian blackwood will be recognized as a sustainable premium tonewood the world over, proudly grown by Tasmanian farmers.

This entry was posted in Markets, Taylor Guitars, Tonewood. Bookmark the permalink.