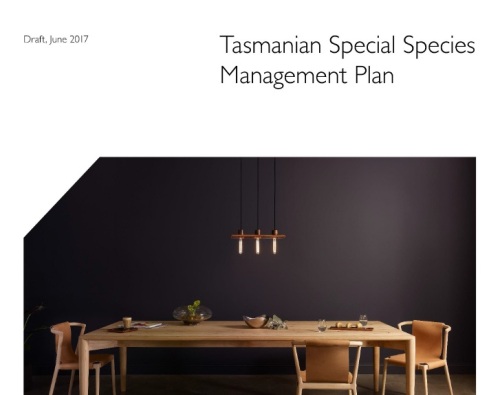 A mere 7 years after the last special species management plan was produced by Forestry Tasmania in 2010 comes another attempt at failed forest policy in Tasmania.

The Plan is essentially a help-yourself DIY approach to public forest management, with an Open Season on the last of Tasmania’s rainforest and oldgrowth.

After the Executive Summary the Plan begins by trying to tell us how important the special timbers industry is; total industry employment, total value, etc.

It’s like the Government telling us that Centrelink is a commercial business not welfare.

The Tasmanian Government believes in Welfare State Forestry, even whilst in competition with private tree growers! So profitability, good commercial management and responsible forest management are out the door.

This draft Plan is not a business plan.

This draft special timbers management plan begins with the premise that Tasmania’s last remaining oldgrowth and rainforests exist to be plundered…….at taxpayers expense……for the exclusive benefit of a handful of local woodworkers!

This draft special timbers management plan does not begin with the premise that Tasmania’s premium timbers should be sold into competitive open markets to help fund schools, roads and hospitals.

Nor does the Plan even consider whether these forests are more valuable left untouched.

In 2010 the special timbers industry was formally admitted into Tasmania’s Welfare State. This new draft management plan now takes that Welfare State to a whole new level of plunder, waste and welfare.

The only basis for a successful forest industry is profitable tree growing.

This Plan represents the exact opposite. It’s a disaster for current and potential private blackwood growers.

The draft Plan is open for submissions until 9am Monday 28 August 2017. Submissions can be sent directly to the Department of State Growth by emailing: specialspecies@stategrowth.tas.gov.au

The Plan will become law once it is signed and gazetted by the Minister.